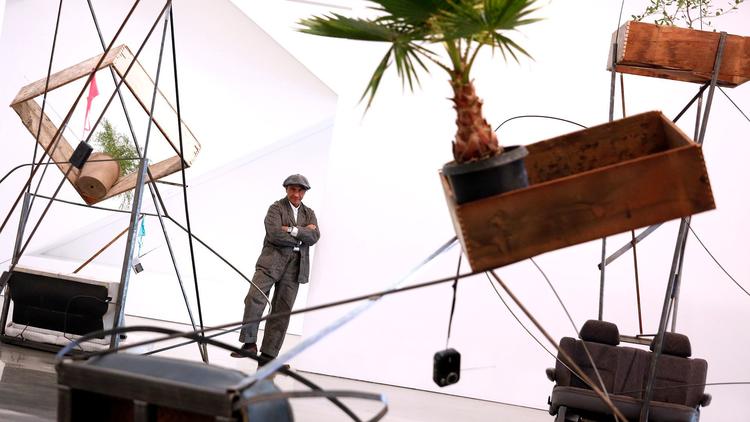 Mexican artist Abraham Cruzvillegas stands amid his sculptures in an exhibition at Regen Projects in 2016. Cruzvillegas and the gallery will be part of Pacific Standard Time programming in the fall. (Genaro Molina / Los Angeles Times)

In the fall, more than 60 Southern California museums and other cultural institutions will come together to produce exhibitions and events related to Latin American and Latino art. Pacific Standard Time: Los Angeles / Latin America — or PST: LA/LA, as it is known — promises to overwhelm with exhibitions covering subjects as varied as pre-Columbian riches and female avant-garde artists of the 1960s and ’70s.

More than 65 commercial galleries from all over Southern California have signed on to feature exhibitions that will complement the theme of the museum shows.

The master printers at Mixografia in Los Angeles are putting together an exhibition that examines the history of printmaking in Mexico throughout the 20th century. The Kopeikin Gallery in Culver City will feature work by contemporary Mexican photographers, including Mariela Sancari and Fernando Gallegos. And Gagosian in Beverly Hills will feature 20 years of work by Brazilian installation artist Adriana Varejão — including a rare multi-channel video piece that has never before been seen in the U.S.

At Regen Projects in Hollywood, Mexican artists Abraham Cruzvillegas and Gabriel Kuri are teaming up to curate an exhibition that puts Latin American artists in dialogue with international artists.

“Are borders still representative symbols that help to define us?” Kuri and Cruzvillegas ask in their proposal.

They will blur those borders with a show that mixes a range of Latin American artists, such as 20th century Mexican caricaturist Miguel Covarrubias and contemporary Chilean conceptualist Camilo Yañez, with figures such as L.A. installation artist Llyn Foulkes and experimental cumbia singer Dick el Demasiado (who is Dutch).

“This is an incredibly topical subject, and the exhibition will allow for a much-needed opportunity to reframe dialogue surrounding cultural production worldwide,” Regen Projects founder Shaun Caley Regen said via email. “It is also a moment to showcase wonderful artists whose work may not often be exhibited or discussed in the context of contemporary art.” 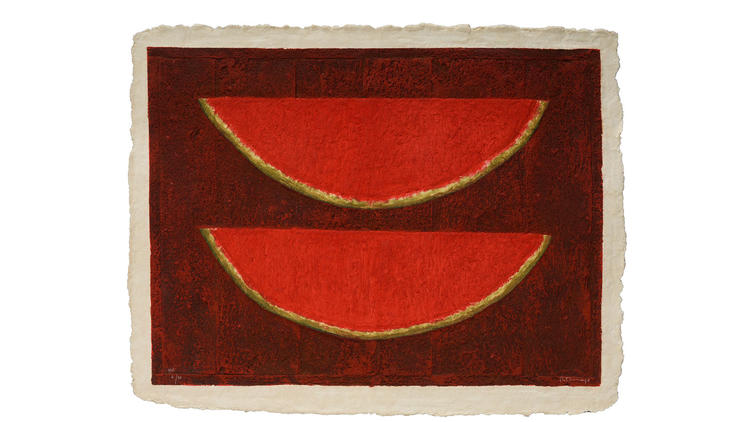 “Sandías,” 1980, by Rufino Tamayo, from an exhibition of Mexican printing to be held at Mixografia as part of PST: LA/LA. (Colección Patrica Phelps de Cisneros)

Other highlights will include the photography of socially minded Los Angeles artist Ken Gonzales-Day at Luis De Jesus Los Angeles, a selection of work by celebrated Mexico City artist Pedro Friedeberg at M+B in West Hollywood and the work of Southern California painter Gilbert “Magu” Luján,” of the ’70s collective Los Four, at Craig Krull Gallery in Santa Monica.

Also included will be a pair of international gallery projects: proyectosLA, which will feature 20 artists from galleries around Latin America in a special pop-up space in downtown Los Angeles, and a collaborative show by various emerging Latin American spaces (including Proyectos Ultravioleta in Guatemala City and Carne in Bogotá, Colombia) at Ruberta gallery in Glendale.

Exhibitions will kick off in September, timed to coincide with the official launch of PST: LA/LA. For a complete guide to PST programming, see the website pacificstandardtime.org.