It was 1973 and Mexican painter Rufino Tamayo was wanting to go big. He’d grown bored with flat, two-dimensional lithography prints, which traditionally ran small because the stone surfaces they were printed on were limited in size. Tamayo brainstormed with printmaker and publisher Luis Remba of Taller de Gráfica Mexicana in Mexico City about busting out of the medium’s parameters. In response, Remba invented a bas-relief printing process in which Tamayo could print works that were both  mural-sized and three-dimensional in texture.

“He challenged me, he wanted something that was palpable,” Remba says. “So we experimented.”

That marked the birth of the so-called Mixografia process, which Remba and his wife, Lea, patented before moving their business, renamed Mixografia Workshop, to downtown Los Angeles in 1984. Since then Ed Ruscha, John Baldessari and Frank Stella, among others, have created limited-edition, handmade prints in the Rembas’ Adams Boulevard workshop.

On Sept. 10, Mixografia will premiere an adjacent gallery, a 6,000-square-foot space with three large exhibition rooms and a small display nook. It will open with the solo show “Paper or Plastic?” featuring new Mixografia prints by L.A. artist Analia Saban.

The new gallery is an important step for Mixografia. Its works have been shown in museums around the world — more than 130 works on paper, sculptures and copper casts were on view this summer at the Georgia Museum of Art — and it has exhibited at art fairs internationally as well as at its defunct Remba Gallery in West Hollywood. But Mixografia has never had a permanent exhibition space in which to exclusively show its work and history. 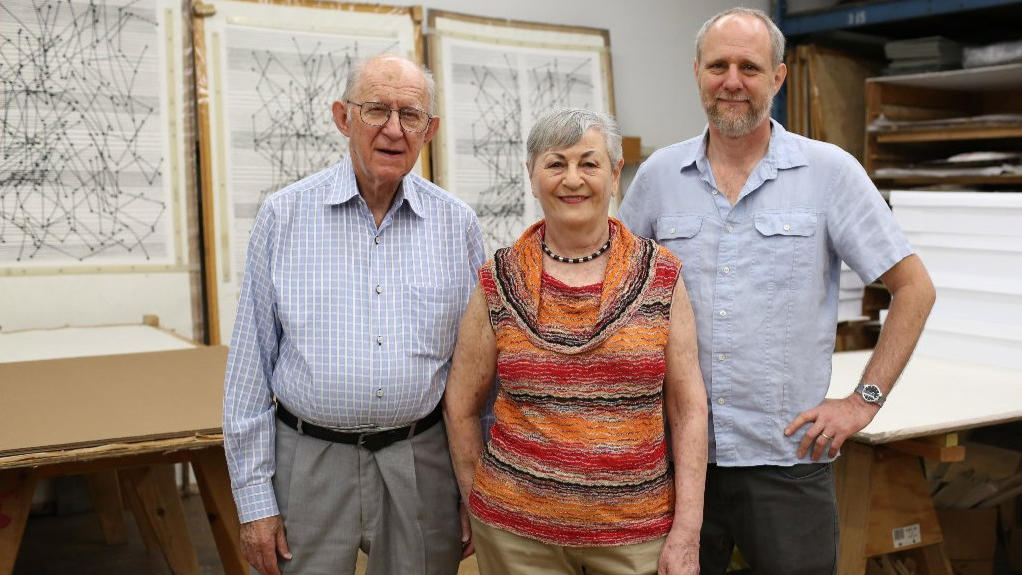 Mixografia aims not only to display curated exhibitions from its archives, but also to showcase the pioneering techniques that it has invented. The workshop has more than 12 patents from the U.S., Mexico, Japan and Europe. In addition to the three-dimensional Mixografia process, it created a precise, bas-relief sculptural technique called Mixocast. Freepoint is an alternate form of drypoint in which artists draw on a soft surface.

“The new gallery is to show our current artists’ work and our work from over the years,” says Remba, 84, during a tour of the studio he still runs with Lea and their son, Shaye. “But also to educate people about different printmaking processes, because now, with the Internet, they’re forgotten by people. We want to revive the printmaking process.” 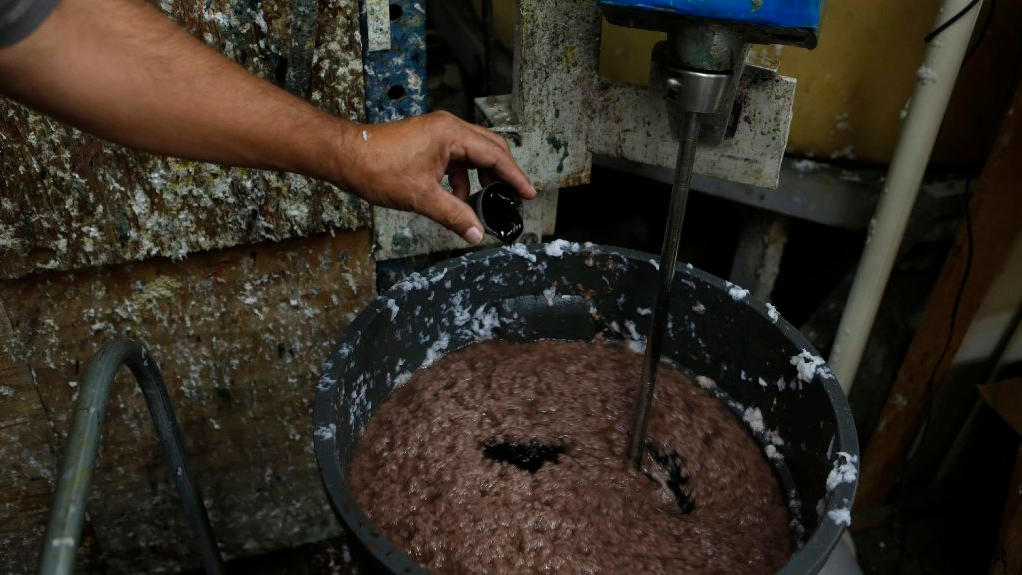 Coloring is added to the pulp as paper is made in the Mixografia workshop in Los Angeles. (Katie Falkenberg / Los Angeles Times)

Mixografia works are created on equipment that Luis and Shaye designed and built. The printing press roller that applies thousands of tons of pressure to the paper was made from the axle of a train locomotive, Shaye says. They make their own especially pliable paper from 100% cotton pulp.  The moist, thick and spongy paper is then pressed onto copper plates made from sculptural models built by the artists. The result is a raised surface protruding as much as 2 inches.

The process isn’t quick. It takes a little more than one day to make a single Mixografia print, and an edition of 30 might take more than a month. But the result is worth the effort, says Shaye, stirring the milky, pudding-like pulp mixture in a plastic barrel.

“We have a different approach, and we want the artists to try new things,” Shaye says. “It gives the artists new possibilities of making something on paper.”

Baldessari created a 2010 pangram — a sentence using all the letters of the alphabet — pairing an image with each letter. His A is for Ant, his Q is for Q-tip. Each object playfully protrudes off the paper. Ruscha’s 2007 framed wood planks, which speak to the passing of time, look like just that: blocks of aging wood behind glass, even up close. But the Rembas insist they are actually sculpted paper, so it must be so.

Most recently, Mixografia created a series of Jacob Hashimoto prints of colorful paper kites and tangled black string against a bamboo backdrop. The dangling string appears so real that it looks as if it might blow off the surface of the print, the prickly bamboo like it might splinter.

“All that we do is make-believe, but it’s all paper,” Luis says. 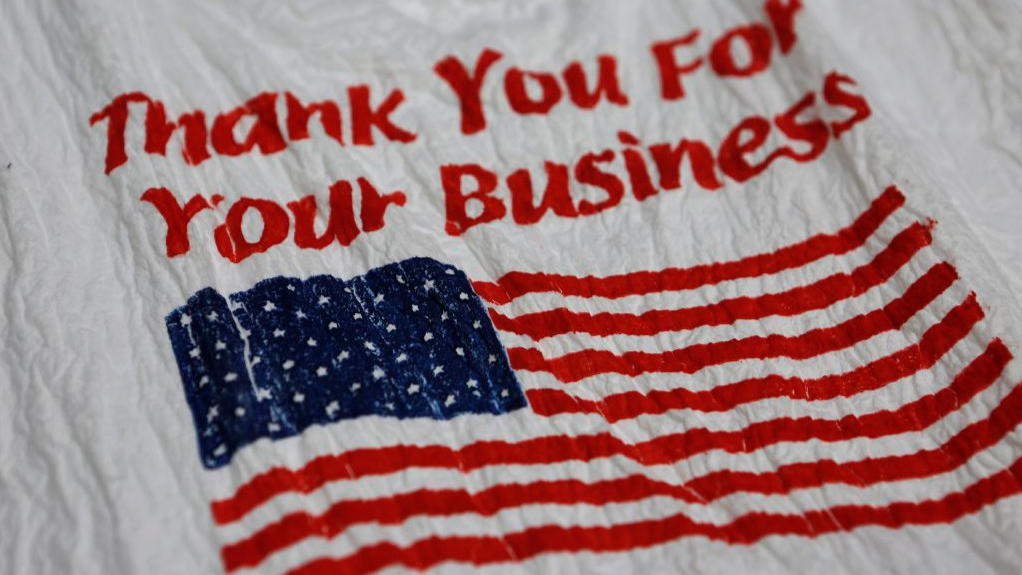 Saban’s “Paper or Plastic” exhibition includes eight prints of disposable plastic bags. Each has a kitschy, graphic logo — “Have A Nice Day,” for example  — and the image swells off the surface of the paper, wrinkles and all, so that from afar it looks like a real bag is tacked to the paper. Together, the works speak to American consumerism and art’s place in the economy.

“It’s a monument to the plastic bag,” Saban says. “Imagine if they were in a collection in a museum and you could show your children: ‘Look, they used to have plastic bags!’”

Saban, one of Baldessari’s former students in UCLA’s MFA program, is having something of an art world moment. In addition to the “Paper or Plastic” exhibition in September, three bodies of her work will premiere at another landmark L.A. printmaking studio, Gemini G.E.L., on Oct. 22.

“I’m fascinated by their process at Mixografia, but I don’t understand at all how they do it,” Saban says. “But I don’t want to know, I want to keep the mystery!”

To date, Mixografia has produced more than 600 editions by more than 80 artists.The Rembas have also worked with Robert Graham, Alberto Burri, Louise Bourgeois, Helen Frankenthaler and the architect Richard Meier.

As for Tamayo, he went on to collaborate with Mixografia for more than 17 years, producing 80 editions including a 1983 print, “Dos Personajes Atacados Por Perros” (“Two People Chased by Dogs”). It was made on the largest transportable lithography stone in the world. The piece, a somewhat pessimistic commentary on Mexico’s early 1980s economic crisis, will be on view, as will the lithography stone itself.